- 23 March
Cromwell's Regiment was originally a single troop of the Earl Of Essex's Regiment of Horse which was raised in Huntingdon. Cromwell went to Edgehill, but unlike the eponymous film, arrived too late to actually take part in the battle. The troop didn't really see any action during the rest of 1642 before returning to Cambridgeshire where it became a five troop Regiment in it's own right.

In 1643 the Regiment mainly spent it's time putting down local Royalist uprisings in Cambridgeshire, and took part in a handful of slightly larger affairs: Grantham, Gainsborough and Winceby. The Regiment continued to grow in size having ten troops by September 1643, and fourteen by January 1644 (by which time Cromwell had been promoted to Lieutenant General of Horse).

The Regiment then went on to fight at  Lincoln, the Siege of York, Marston Moor (all fourteen troops), Banbury Castle, Second Newbury. Half the regiment joined Waller's Southern Association participating in many minor skirmishes. 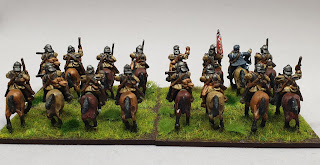 Cromwell's troop's cornet is recorded as being a blank; many of the other troops have cornets with red backgrounds. Either his cornet actually was white, or the recorder didn't get around to recording it. So I have represented the Regiment as Captain Henry Ireton's troop, as we know what his cornet looked like. Ireton was a really interesting fellow, best to look at the BCW Project biography of him, rather than I try and attempt to paraphrase it here.


If you enjoyed reading this, or any of the other posts, please consider supporting the blog.
Thanks.
figures Maverick Models Parliamentarian Peter Pig Regiment of Horse