- 22 April
One of the most represented regiments in the history of ECW miniatures painting; ranking alongside Hesilrigge's lobsters, Newcastle's lambs, and Rupert's blewcoats. Why's that I hear the uninitiated I say? The answer is "purple". Who in their right mind is going to paint yet another Venetian red coated regiment when you can paint one in purple coats? 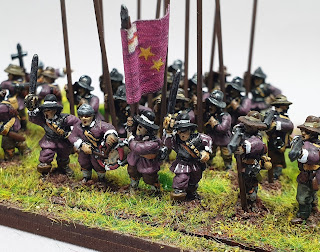 Robert Greville, 2nd Baron Brooke, raised two Regiments of Foot. One was raised in Warwickshire to fight in the midlands: the other shortlived regiment, was raised to serve in the Earl of Essex's army in 1642.

The Regiment that fought with Essex is the one represented here, and is also the one that wore purple coats. They are believed to have flown purple colours with mullet (stars) devices; we do not know what colour these stars were, but heraldic convention would have them or (gold - so in reality yellow) or argent (silver - white). 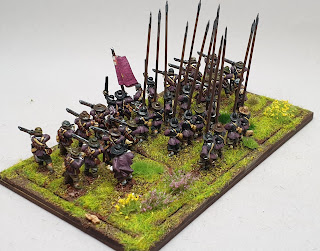 We don't know if Lord Brooke's midland regiment (the other one) were issued with purple coats (historians suggest this was unlikely, and wonder if they were issued coats at all) or what colour their flags were. 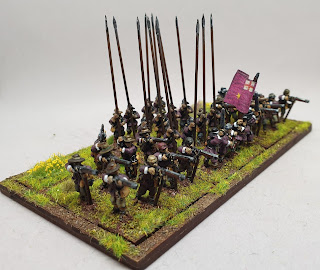 Brooke's fought at Edgehill, and most notably were the defenders of Brentford along with Denzil Holles's Regiment. The Regiment appears to have been nicknamed the 'dyers': many secondary sources claim that the Royalist victors at Brentford described Brooke's Regiment as 'dyers' on account of their coat colours. We do know that the reference to 'butchers and dyers' relates to the mass of foot at Brentford who were made up soldiers from Denzil Holles's and Lord Brooke's regiments:  I believe the contemporary source for this quote is the pithily titled Letters From A Subaltern Officer of the Earl of Essex's Army by Nehemiah Wharton (Nehemiah's letters were addressed to his former master and friend George Willingham, a merchant at the Golden Anchor, St Swithin's Lane) which were 'discovered' in the State Papers Office by Sir Henry Ellis and reported to the Society of Antiquaries in 1854. Nehemiah was referring to the numbers of apprentices that were present in the Regiments rather than their coat colours. What remained of the Regiment was present at the Turnham Green standoff, before being disbanded in December.

Brooke was appointed commander of the Midlands Association in December 1642 and appears to have been popular with his men. He drove the Royalists out of Stratford Upon Avon in February 1643 before turning his attentions to the Royalist stronghold of Lichfield. During the siege he was shot by a sniper, a 'deaf mute'* gamekeeper/poacher called John Dyott, shooting from Lichfield Cathedral's tower. A distance of 180 metres, so a very impressive shot for the time. This incident is often cited as the first sniper kill in the history of warfare. There is a plaque commemorating the incident and Lord Brooke on Dam Street, Lichfield. 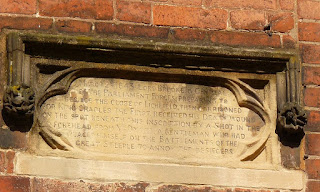 Figures were painted by Alan Tuckey, the basing by yours truly.

* language used is the contemporaneous description of Dyott