Earl of Manchester’s Regiment of Dragoons

- 15 April
The latest unit to have their fifteen minutes fame: first appearing, very briefly, in one of the first posts to appear on the blog.

The Earl of Manchester raised a Regiment of Dragoons to serve in the Eastern Association in Essex in 1643. 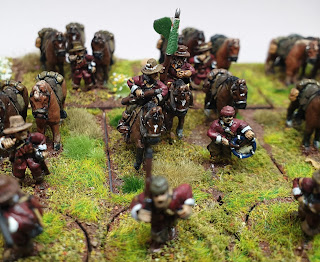 In early 1644 they were active in the Newark area taking part in both the siege and battle at Newark.

April 1644 command passed to John Lilburne as Manchester had effectively been promoted: he had been given control of the Eastern Association's finances (previously the Earl of Essex had ultimate military authority over all of Parliament's forces), 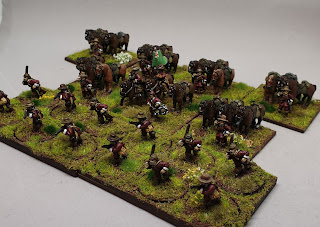 Under Lilburne's command the Regiment marched to join the Siege of York; five companies fought at Marston Moor (where their previous colonel, Manchester, distinguished himself by remaining upon the battlefield whilst almost every other senior commander had disappeared).

In 1645 they fought at Scarborough and Pontefract, before the Regiment was dissolved. 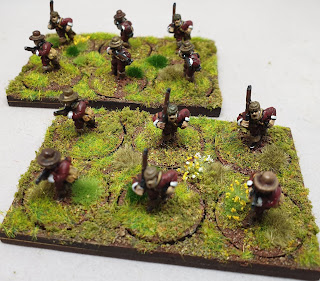 We don't know about their coat colours or even if they were issued with any: we know that some of Manchester's Regiment of Foot had red coats lined with green, and some had green coats lined with red, so I decided to follow this by giving the dragoons red coats. 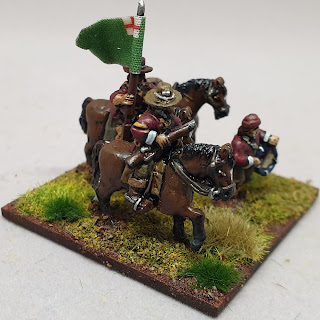 Nor do we know anything about their guidon; we know that Manchester's company of his Regiment of Horse had a green cornet (the other ten companies had different coloured cornets - we know of five other cornets which had fields of blues or reds), so I decided to pick up on the green cornet for the guidon. The guidon my Manchester's dragoons carry is purely conjectural, but follows the conventions of those that we know about. Stuart at Maverick Models happily produced it for me, and it now appears in his catalogue.


The command stand has been made from a mounted dragoon trooper, a regular cavalry cornet holder, a horse from the horseholder pack, and a drummer from the infantry command pack. Painted by Alan Tuckey and basing by me.