- 06 April
In the seemingly endless production line of harquebusiers it is a great relief to paint some cuirassiers.

Now these aren't your run of the mill Hasselrigg's "housewives' favourite, should have been a racehorse"* Lobsters. No, these are the Marquis of Argyll's Lifeguard cuirassiers. 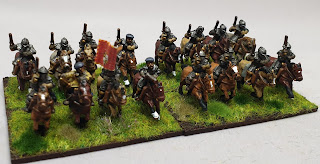 A troop consisting initially of gentlemen volunteers, possibly equipped as cuirassiers, forming Argyll’s Lifeguard. The word 'possibly' is good enough for me, because who doesn't love a cuirassier unit?

Their regimental history reads pretty much as 'quartered at..' punctuated occasionally by 'possibly at..'.

At some time in 1645 they accepted the surrender of Lindisfarne, but spent the rest of their time serving in Scotland. Argyll was present at the battles of Fyvie, Inverlochy and Kilsyth, but no specific mention was made of his Lifeguard being present: it would make sense that his Lifeguard were there, seeing as that's the whole point of having a Lifeguard.

The troop lasted until February 1647 when they disbanded. In 1648 Argyll led 100 horse in the Whiggamore raid, but these were likely a collection of recent volunteers rather than a formal troop.

From 1649 Argyll was nominal commander of a troop in Lord Mauchline’s Regiment of Horse.

These are old PP cuirassiers, not the awful new one piece castings. Personally I think these have more character than the new ones, much more animation. The new castings are very flat and two dimensional, have infill underneath their firing arms which is very difficult to remove (I gave up and tipped the figures in the bin); I replaced the horses with the newer horse sculpts (the older ones are slightly shorter). I persevered removing the infill from the officer (if you used him with the one piece rank and file he'd be pretty indistinguishable);  the ensign is also from the one piece range. A few headswaps to make them look more Covenanter like. Also a headswap on the casualty figure - remember kids be careful with knives!


* courtesy Half Man Half Biscuit
If you enjoyed reading this, or any of the other posts, please consider supporting the blog.
Thanks.
Covenanters Cuirassiers figures Maverick Models Peter Pig Regiment of Horse Warbases