- 29 April
Another briefly mentioned regiment gets it's fifteen minutes of fame. 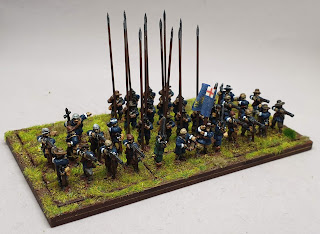 Originally I had them labelled as Colonel Edward Aldrich's Regiment of Foot I realised that they were in fact flying the colours of Lord Saye and Sele's Regiment, albeit with an incorrect pattern of devices. Aldrich's Regiment grew out of Lord Saye and Sele's so they were sort of vaguely right but the level of wrongness bothered me. Lawks amercy guv'nor! I'm becoming a button counter! Brushwork on these by Alan Tuckey, basing by my own fair hand.

So they now sport a new movement tray, and correct colours for the third captain's company of Lord Saye and Sele's Regiment of Foot.

Raised in 1642 they fought at Edgehill, were besieged at Banbury and were present at the Turnham Green standoff. 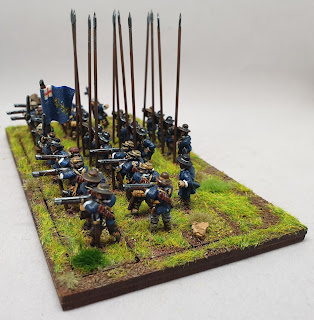 Late in 1642, Sir John Meldrum took over command as Colonel and the Regiment was possibly at Marlow and Wokingham; they were definitely at the First Siege of Newark and were then garrisoned at Aylesbury where they were involved in a bit of skirmishing and stand offs.

The command of the Regiment passed to Edward Aldrich in July 1643. They rejoined a field army, giving up their garrison duties at Aylesbury and were equipped with new flags - still blue, but now with gold laurel wreath devices. They went on to fight at Lostwithiel and Second Newbury.

In 1645 they entered service in the New Model Army as Colonel Walter Lloyd's Regiment of Foot
A straight out of the bag unit of Piggies, these were painted by Alan Tuckey and based by myself. 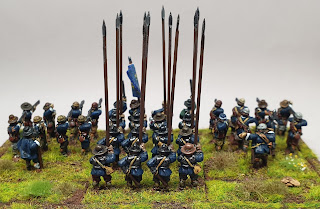 The Regiment is re-enacted by Lord Saye and Sele's Regiment

(And in case you are wondering, yes a polar explorer, and a distinguished actor are both descendants of this famous Civil War family.)
If you enjoyed reading this, or any of the other posts, please consider supporting the blog.
Thanks.