- 05 October
You probably don't know much, or have even heard of Sir Horatio's Regiment of Horse but you will, no doubt, be aware of their cornets; nor may you now the story behind their less than subtle message. 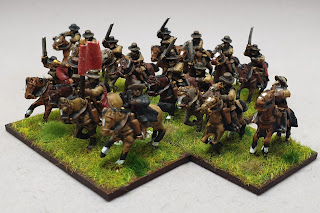 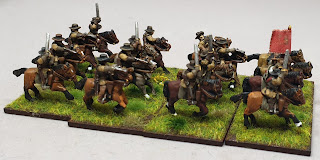 The mottos are commonly believed (in a modern context) to make reference to the marital affairs of Robert Devereux, 3rd Earl of Essex. Or rather the affairs of his first wife, and possibly his second. Essex was married at age 13 to the 14 year old Frances Howard before being sent on a grand tour of Europe. The marriage was a political union, the newlyweds were separated after the wedding to prevent  consummation and pregnancy at an early age. Essex returned to Britain two years later; during this time Frances had started a relationship with Viscount Rochester. Needless to say divorce proceedings were started by Frances, which were conducted in public, with claim and counter claim going back and forth. The divorce finally being granted in 1612.

Essex would later serve as juror in a case which saw his former wife and her lover stand trial for the murder of Sir Thomas Overbury (by poisoned enema, a method of murder sadly lacking from the game Cluedo), for which they were found guilty and sentenced to death (they would spend time in the Tower of London before being pardoned by James I). Essex would marry again, somewhat disastrously, and the gossip of the day claimed that Essex's son was actually fathered by Sir Thomas Uvedale.

Alternatively, and more likely given the wording of the major's cornet, the cornets could simply be slurring all roundheads rather than just Essex.

Not much is known about Horatio: one of four brothers, he was originally from Somerset, and one time Governor of Tetbury. He had an estate that straddled the border of County Durham and North Yorkshire which was sequestrated by Parliament after the First Civil War. Horatio fled the country in 1646, returning in 1649 when he submitted a case to the Compounding Committee as he wanted to buy back his estate, but could not provide the original deeds.

I had intended to 'do' lots of headswaps with this unit, it was only when I started gluing half painted riders to almost finished horses that I realised that I had completely forgotten. So, I present a straight out of the bag unit - with one minor exception, a wounded cavalry man in hat
If you enjoyed reading this, or any of the other posts, please consider supporting the blog.
Thanks.
figures Maverick Models Peter Pig Regiment of Horse Royalist

Earl of Northampton’s Regiment of Horse

The Earl of Northampton's Regiment of Horse had a number of troops - detachments garrisoned Banbury, whilst the large part of the Regiment fought with the King's Oxford Army.

Originally led by the Second Earl, command would pass to his son (along with the title) after Hopton Heath.


The Second Earl Spencer Compton was a great friend of Charles I, then the Prince of Wales and would be one of two bearers of his ceremonial train at his coronation.
He commanded the Royalist forces against Gell's Parliamentarians at Hopton Heath; routing the Parliamentarian cavalry and capturing eight pieces of artillery. Just as victory seemed assured, his arrogance got the better of him: he found himself too far forward, isolated and surrounded, and to make matters worse his horse stumbled, having fallen foul of a rabbit hole. Parliamentarian soldiers offered him quarter, but he refused to accept quarter from "base rogues and rebels". And so he was killed by a blow to the head from a …
Read more