- 26 April
This post is brought to you courtesy of a Twitter poll; struck down by indecision, the poll overwhelmingly voted for a Regiment of Foot rather than a Regiment of Horse to be next on the painting queue.

Sir Arthur is best known for raising the London Lobsters, he also raised a Regiment of Foot, who served in Waller's Southern Association.
Originally planned to be Colonel Edwards Aldrich's RoF, I realised that I'd already represented them (but in their Lord Saye and Sele guise), so I needed another blue coated regiment. Hesilrigge's fitted the bill. 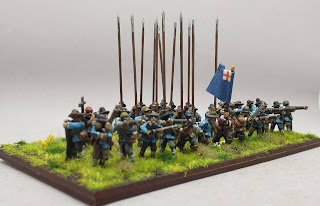 Raised in August 1643 they first saw action at the siege of Basing House. They would go on to the standoff at Farnham; they stormed Alton Church; the siege of Arundel; Cheriton; besieged at Lyme Regis; Cropredy Bridge; the relief of Taunton; they garrisoned Wareham; possibly took part in a skirmish at Dorchester; before being reduced into Sir Hardress Waller’s Regiment of Foot of the New Model Army in April 1645. 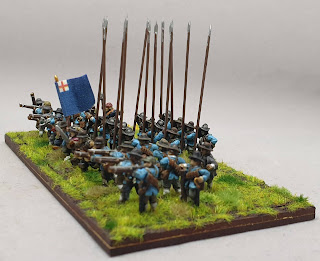 Cooke’s Regiment of Foot were reduced into the regiment in May 1644; and, in July 1644 two companies transferred to Colonel Holborne’s Regiment of Dragoons. 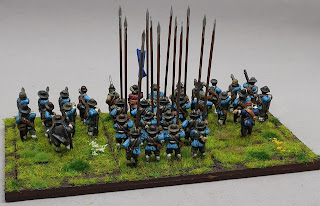 Noted as wearing blue coats at Lyme Regis in June 1644, they were also described as "carrying eight or ten blew colours", no device design recorded: so, to be on the safe side, they carry the lieutenant colonel's colour. For a bit of variety I have gone for a light blue coat, using Foundry 22B vivid blue which looked completely wrong until it was washed with Nuln Oil. A handful of headswaps, mostly my aversion to morions.
If you'd like to know more about Sir Arthur he's already graced these pages.
If you enjoyed reading this, or any of the other posts, please consider supporting the blog.
Thanks.
figures Parliamentarian Peter Pig Regiment of Foot 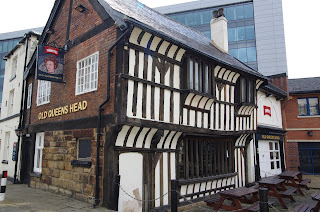 Due to the fact that the old County of Yorkshire is massive, and now exists as four administrative 'County Councils', coupled with the fact that the Yorkshire entry was becoming unwieldly, I have decided to split 'Houses of Interest: Yorkshire' into the four 'new' Counties. You can find  West Yorkshire here and North Yorkshire here East Riding coming soon. The former People's Republic of South Yorkshire saw a little less action than it's cousins West, North and East Yorkshire. The largest 'incident' being the Siege of Sheffield . The town fluctuated between Parliamentarian and Royalist control, leading to a 10-day siege of Sheffield Castle by Parliamentarian forces in August 1644. Eventually, the siege resulted in the Royalist surrender of the town and ultimate destruction of the Castle. The Sheffield Castle site has long disappeared underneath the modern city, it was located in the space boundaried by Castlegate, Waingate and Exchange Street.
Read more 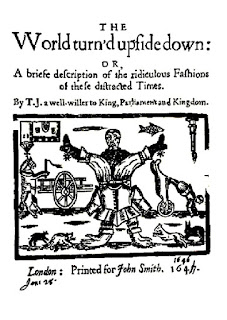 Google/Feedburner have announced  that they will be discontinuing the 'follow by email' gadget with Blogger in July 2021. Obviously this will only impact those of you who do follow by email: no idea how many of you there are, as Blogger doesn't easily let me know this. So you'll be pleased to hear that my nonsensical rubbish will no longer be cluttering up your inboxes on a Monday. Those of you who will be devastated to lose these quality missives, I usually schedule posts to be published at 6am (UK time) on Mondays. DELETE AS APPROPRIATE There is a way that I could make a mailing list, to which you could subscribe, but as this would then add onerous bureacracy, and cost (think GDPR), on to my already busy schedule I'm not going to. Sorry. Update: a little more delving on the FeedBurner service update page states that they are migrating to a more stable platform. Whether this means that 'follow by email' will return at some point I'm not sure. KeepYour
Read more