- 03 January
Both my Parliamentarian and Royalist armies have identical artillery units. One heavy, one medium, and two light guns. All from the Peter Pig ECW range. Each gun is crewed by four gunners.

Gun crews were civilians, which goes against our twenty first century logic, but they were civilians nonetheless, most likely commanded by an experienced military man. They didn't have uniforms, wearing their civilian clothes instead.

Artillery pieces would need some form of protective coating from the weather: so what colour to paint them? Very few contemporary descriptions exist of artillery pieces: those that do tend to dwell on the logistics, and methods of moving the guns. One description, of the New Model Army guns, describes them as being "fair lead colour" which could mean red-lead or grey. We just don't know what colour gun carriages were. The Royal Armouries has a reproduction full size saker which has a red carriage. If it's good enough for the Royal Armouries, then it's good enough for me.

It was fairly conventional to paint gun carriages bright colours during the Thirty Years War, and as so many early war practices had been brought back from the continent by British mercenaries it doesn't take too big a leap of faith to assume that this practice was used in England. Gun barrels would be bronze or iron; many English foundaries preferring to use iron. Iron barrels and carriage metalwork would undoubtedly be painted black.

My guns are bright colours, although I haven't strayed too far from Napoleonic gun carriage colours. Wood preservative technology probably hadn't evolved that much since the seventeenth century so my colour palette includes green, ochre, red, blue and grey.

Bases are different sizes to aid in identification of size of gun. Peter Pig simply call their pieces, heavy/medium/light as I don't think that they are a specific model representation of a particular piece of ordinance.

My inner anorak didn't like that wanting to use some of the rather fanciful names given to cannons in the seventeenth century. After much deliberation, using artillerymen tables from the time (and models offered by Foundry and the Perrys) I hit upon the following: 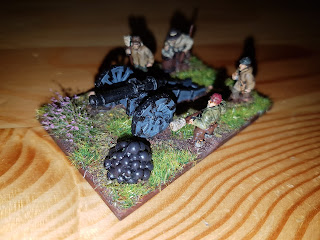 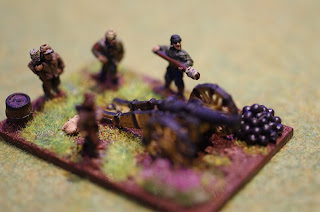 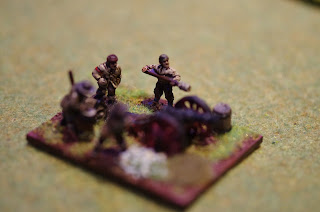 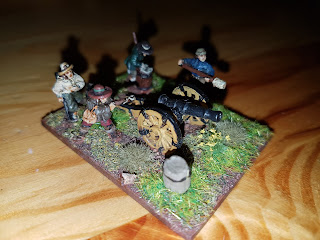 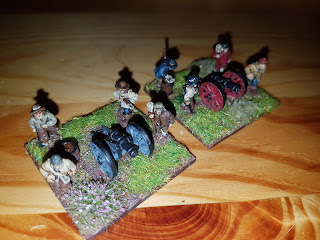 You'll notice that there is some extra paraphernalia added to bases: these bits are courtesy of Magister Militum and Donnington Miniatures. (Artillery pieces and gun crews painted by Alan Tuckey.)

Of course no artillery train is complete without limbers, unfortunately Peter Pig don't make limbers. So I sourced light limbers from Naismith, and heavy limbers from Museum Miniatures. The drovers that came with the heavy limbers were considerably bigger than Peter Pig figures, so I discarded them and substituted Peter Pig dragoon horseholders. 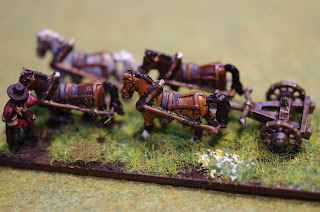 The Naismith limbers came without human figures, so they too got dragoon horseholders. 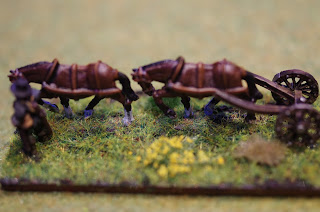 As the horsey inclined readers will have noticed the drovers are on the correct side for leading horses (apparently you should lead a horse on it's left); I clearly did learn something taking pupils to Riding for the Disabled riding lessons!