Their cornet is interesting; an old Military Modelling article from the 70s, on ECW flags, gave the cornet as blue with white horizontal stripes (from the Earl's coat of arms); however, the rather succinctly titled 'BL MS Additional [Sloanee] 5247' gives the field colour as solid blue. As BL MS Additional [Sloanee] 5247 was a contemporaneous pattern book of cavalry cornets I have plumped for the solid blue field. 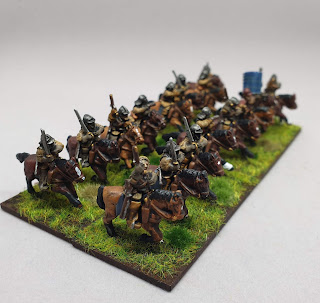 Just a couple of headswaps in this unit, and one of the mounted casualties.
figures Maverick Models Parliamentarian Peter Pig