- 04 January
What can I say about the Portland Collection at the Harley Gallery, on the Welbeck Abbey estate, near Worksop?

Firstly, I must point out that photography is not allowed. At all.  Not even sneaky ones without flash, so you'll just have to take my word for what's there.

Elsewhere there is a Newark siege coin, a number of Charles I medallions and Charles's toothpick and case. Highlight of the entire gallery has to be a drop pearl earring  worn by Charles in pretty much every one of his portraits (from the age of sixteen). A close second is the chalice that he drank from on the day of his execution.

A close up picture of the earring can be seen here 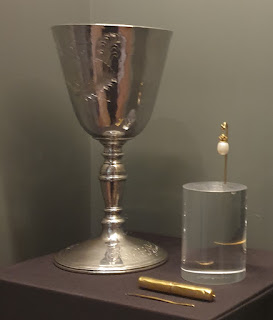 But as there is strictly no photography I have absolutely no idea how this image appeared on my phone, Charles's goblet, toothpick and the famous earring

There is a large model of Charles II's royal yacht Henrietta, which rather interestingly the real vessel was sold and converted into a dive support vessel.

There is a large exhibit consisting of miniature portraits; later this month a rare miniature of Oliver Cromwell will go on display.

An empty display cabinet bears the scars of a robbery last year, when the Portland tiara was stolen. The tiara has not been recovered, and a £100k reward for information still awaits anyone with information.

As always cafe, farm shop and garden centre on site to distract the rest of your household (and empty your wallet).

Close by is Cresswell Crags, which was used in the final scene of Hex.