- 20 April
The last of the current batch of cavalry. Can't wait to paint something in 'not-brown'™ paint for a change.

Lord Hopton’s cavalry cornet was noted by Symonds (1644) as red, fringed red and white, with a cannon discharging in gold and a motto in gold letters above: Hopton was General of Artillery to Prince Maurice, so a rather fitting cornet device. 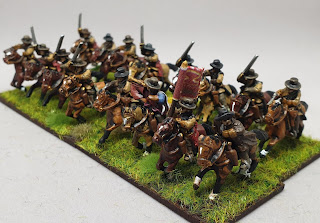 Sir Ralph, Lord Hopton was the Royalist commander of the King's army in the west country. He raised a Troop of Horse in Somerset, in July 1642. The Regiment fought st Sherborne Castle, Braddock Down, Beacon Hill, Sourton Down, Lansdown, Bristol (the Troop had expanded sometime about now, and become a fully fledged Regiment), First Newbury, Cheriton, Second Newbury, the relief of Donnington Castle, Langport, Torrington before  surrendering at Truro in March 1646. 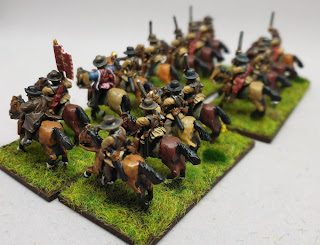 Following the collapse of the Royalist cause, Ralph found himself in exile in the Low Countries. He was to die in Bruges, of fever, in 1652.
If you enjoyed reading this, or any of the other posts, please consider supporting the blog.
Thanks.