- 20 May
Copley's was a Parliamentarian Regiment of Horse serving with Lord Fairfax’s army of the Northern Association. Raised in 1643 they fought at Adwalton Moor, within a couple of months they were transferred from being an independent troop to one of the troops of Thomas Fairfax's Regiment of Horse.
By April 1644 Copley was made Colonel of his own Regiment of Horse - it is unknown if his original troop formed the basis of this new Regiment or if they were a completely separate unit. This 'new' regiment besieged York, fought at Marston Moor, continued besieging York, and fought at the Battle of Pontefract.

Then it gets a little confusing. It is thought that Fairfax's and Constable's Regiments of Horse were reduced into Copley's Regiment. It appears to have been the case in a number of regional armies that 1645 saw a reduction in the number of regiments either through disbanding or merger. This was partly as a result of the self-denying-ordinance and partly as a means of saving money. 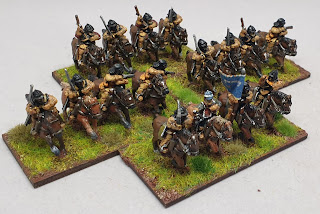 They then went on to fight at Sherburn in Elmet, and our final reference to the Regiment has them quartered near Doncaster. 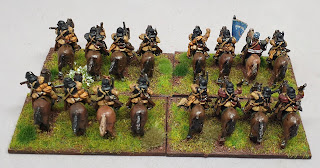 Painted by Alan Tuckey, based by my own hamfisted hand

As for Copley himself, we know very little. He lived in Wadworth, Yorkshire and his second wife, Lady Mary Jones, was the daughter of Viscount Ranelagh (and the widow of the 1st Earl of Donegall).
The only other reference that I can find for him is his request for arrears of pay from the House of Lords 'in the service of Parliament' - a staggering £4324 (modern equivalent approximately £447, 608)!

Thanks to Tim at the BCW Wiki for pointing out my brainfart: I had  rechristened Christopher as Charles. All corrected now. Whoopsies!
If you enjoyed reading this, or any of the other posts, please consider supporting the blog.
Thanks.