Hopton's Foot were raised around Bristol in 1643. It is believed that they took place in the storm of Bristol in July of that year. Parts of the Regiment took part in the siege of Gloucester, a skirmish at Stow, First Newbury and the standoff at Farnham. 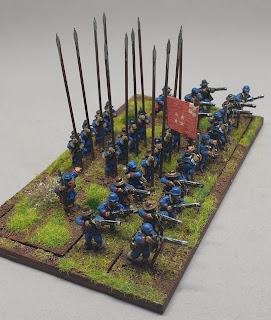 In 1645 it is thought that they besieged Taunton, took part in the battle of Langport, were besieged at Bristol, and possibly besieged at Lacock House. Their last actions were at Torington and Pendennis Castle.

The Regiment is re-enacted by Lord Hopton's Regiment of Foote.
If you enjoyed reading this, or any of the other posts, please consider supporting the blog.
Thanks.
figures Maverick Models Peter Pig Regiment of Foot Royalist