- 13 May
Next regiment in the spotlight is Richard Browne's Regiment of Horse who have an absolutley brilliant cornet. Which is about the most exciting thing that I can actually tell you about them. 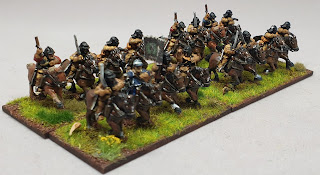 Painting by Alan Tuckey, basing by my own fair hand

Richard Browne was the senior captain in the Orange Regiment of the London Trained Bands, when the War broke out. He marched with Waller at Winchester and was promoted to Colonel. As Colonel his role was suppressing opposition to Parliament in London and Kent.

Once again he would support Waller, this time in the Oxford campaign, joining him shortly after the battle of Cropredy Bridge.

Browne was then appointed governor of Abingdon, from where he directed operations against Royalist forces around Oxford.

Often complaining to Parliament about mutinous men, poor pay, and lack of supplies he was offered a Baronetcy by Lord Digby in return for surrendering Abingdon to the King. He cultivated an interest in this offer whilst he stocked up on supplies, reinforcements and completed the town's defences. This helped him withstand a surprise attack from Prince Rupert.

He would later join Cromwell's army shadowing the King's march north (apparently they didn't get on very well); and Fairfax's at the First Siege of Oxford.

In 1647 he was one of the commissioners who received King Charles form the Scots Covenanters; which he was opposed to, and he would find himself falling from grace with Pride's Purge.

He was suspected of being involved in Booth's Uprising and had to go into hiding.

At the Restoration he was made a baronet, and restored to the rank of Major General of the London Militia.
If you enjoyed reading this, or any of the other posts, please consider supporting the blog.
Thanks.
figures Parliamentarian Peter Pig Regiment of Horse