- 04 May
Yet another briefly mentioned Regiment gets it's moment in the spotlight. This time Lord Robartes's Regiment of Foot.

He raised a regiment in 1642 and fought with 'valour' at Edgehill, the regiment fought at Brentford, were present at Turnham Green, the siege of Reading, a skirmish at Stow, the relief of Gloucester, First Newbury, Olney and ventured into Cornwall with Essex in 1644. There they fought at Barnstaple, Warminster, Horsebridge and Lostwithiel before taking up garrison duties at Saltash. 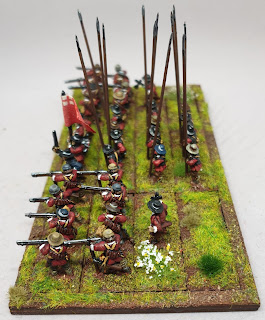 Lord Robartes was made governor of Plymouth but lost his job with the Self-Denying Ordinance, and returned to his home at Lanhydrock. He would return to public office with the Restoration and amongst other posts was Lord Privy Seal. He died in July 1685 and is buried at St Hydrock's Church. 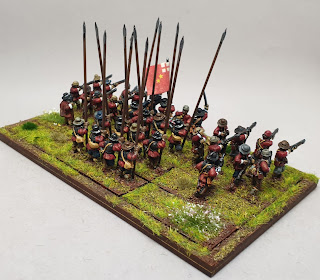 Sadly the home he built and completed just before the outbreak of the Civil War was destroyed in the nineteenth century by fire, so few artefacts relating to him survive.

The Regiment is re-enacted by Lord Robartes Regiment of Foote
Brushwork on these by Alan Tuckey, basing by my own fair hand.

As a complete aside - this is my 200th post! A celebratory schooner of sweet sherry is in order.
If you enjoyed reading this, or any of the other posts, please consider supporting the blog.
Thanks.
figures Parliamentarian Peter Pig Regiment of Foot