Here's the final unit of highlanders from the current batch of figures for the Army of Montrose. More will follow, eventually. When I recovered from the psychological trauma of having to paint tartan.

The Lochaber Highlanders were a subset of Cameron Highlanders, traditionally fiercely loyal to the crown they are perhaps best known for their modern association with the  Lochaber axe which their valley lends it's name to: the Lochaber axe is a traditional Scottish halberd that may or may not originate from Lochaber. The Lochaber men's loyalty to the Stuarts would be the last acts of the suppression of the Jacobite 1745 Rising.

We don't know much about the Lochabermen as an entity in their own right (their exploits with the 1745 Rising are quite well documented) as they were raised by their Clan Chief Allan Cameron of Lochiel and their exploits are possibly subsumed into the general Clan Cameron history. 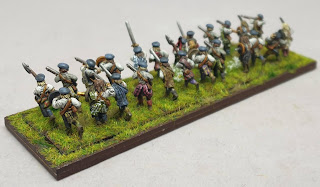 They are believed to have fought at Tippermuir and Inverlochy, where their 83 year old Clan Chief was present and watched the battle. It is more than possible that some of the Lochaber men fought with the main body of Clan Cameron.
Another straight out of the bag unit of highlanders - I resisted the urge to have a Lochaber axe heavy unit as there is no evidence to support excessive use of the axe by any of the men from Clan Cameron. They have an English officer with a blew bonnet headswap to represent the tradition of the Scots having provided a number of mercenaries during the Thirty Years Wars. 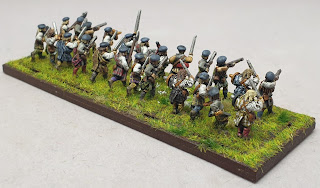 My new painting tartan tips: if a stripe is too heavy or goes wayward a quick wipe with the damp end of a cotton bud will remove the stripe that you have just applied (too heavy a hand will also remove the most recently applied stripes too so be careful). Plus avoid really bright colours - drab colours are much more forgiving, and probably more appropriate.
If you enjoyed reading this, or any of the other posts, please consider supporting the blog.
Thanks.
Army of Montrose figures Highlanders Peter Pig Regiment of Foot