- 17 May
And so, dear readers (hello both of you), our attention returns to the London Trained Bands; rather than regale you with discussion about their uniforms (or lack of them) I will, instead, direct you here. 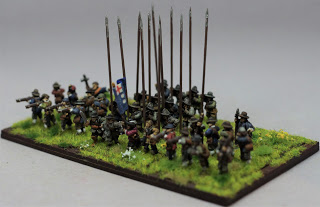 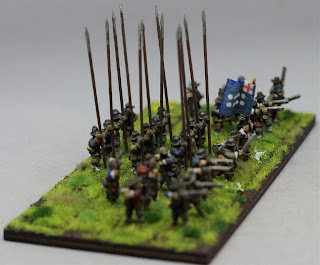 The Blue Regiment were at Turnham Green; went to the relief of Gloucester; fought at First Newbury; took part in a skirmishes at Aldermaston and Padworth; and returned to Newbury for the Second Battle. After Second Newbury they returned to London (the other LTB regiments returned to London not long after) as the New Model Army became Parliament's field army of choice. 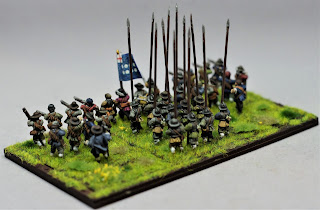 After 1645 nothing really of note happened with the Blue Regiment other than changes in colonelcy: Adams was replaced by Underwood in 1645; 1658 John Ireton was made Colonel; 1659 Bolton replaced Ireton; 1660 William Vincent was made Colonel until the Regiment's demise in 1661. 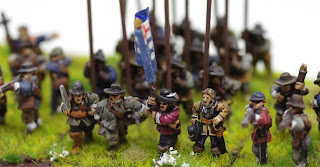 A handful of headswaps with this unit and a PP collectible figure as officer - a small range of limited, free, one time only figures hidden away at the bottom of PP's front page. PP's collectible figures have recently become a way of commemorating the lives of wargamers known to PP; a wonderful and fitting memorial - well done PP. This figure represents Paul Croker, and is one of the nicest ECW sculpts from PP. I hope that the future personality packs, hinted at by PP, are of similar quality. 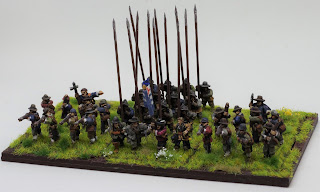 Not a 'new' Regiment, but another in the series of 'briefly mentioned, I'd better go into a bit more detail'. So here is fifteen minutes of fame for the Earl of Buccleugh's Regiment of Foot. Later known as Colonel Walter Scott’s, then Colonel William Baillie’s Regiment of Foot, they were also known as the Tweeddale Foot. The Tweeddale Foot were raised in August/September of 1643 by Francis Scott, the 2nd Earl of Buccleugh (now spelled Buccleuch). The majority of its men came from the presbytery of Selkirk. Numbering 1200 men they joined Leven's army in January 1644 and marched south into England. Their first engagement was at the Battle of Hylton to the west of Sunderland (probably better known as the Battle of Boldon Hills), closely followed by joining the besiegers of York. They were brigaded with Loudon's Glasgow Foot at Marston Moor, but fled the field after being broken by the left wing of the Royalist horse. They were then quartered in South in Yor
Read more