As the world slowly starts to learns to live with the Covid 19 virus, the UK is opening up again. The #ECWtravelogue visited the 'smoke' to tick off a few things that had been overlooked, or weren't on view when original entries were written.

The National Gallery has already graced these pages, so why does it feature again?

Van Dyck's stunning equestrian portrait of Charles I has undergone a lengthy restoration and is now on display in room 21.

The Soanes Museum is one of London's 'off-the-beaten-track' museums. They have in their collection the Naseby jewel, which is believed to have belonged to Charles I, who lost the jewel as he was spirited away to safety from the battlefield.

Just around the corner from The Soanes is Chancery Lane, where John Thurloe lived at 24 Old Buildings, the back of which backs onto Chancery Lane (opposite Cursitor Street). 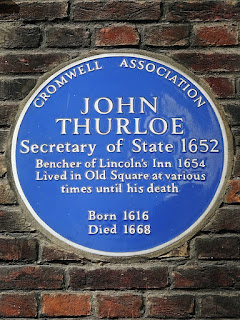 Thurloe is buried in the crypt of Lincoln's Inn Chapel. 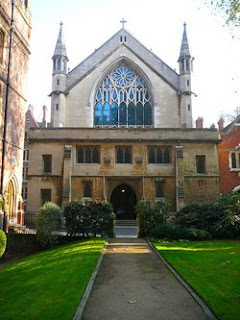 The Savoy is hardly where you'd expect a memorial to Oliver Cromwell (and Charles II). This was the site of the Savoy Palace. Located on Savoy Court are a number of plaques, the plaque closest to the entrance of the hotel is where the Westminster Confession of Faith was modified by the Savoy Declaration. In case you are wondering what all that means - Parliament effectively drew up a list of acceptable religious texts and practices (earlier versions facilitated the Scots Solemn League and Covenant army to side with Parliament, later versions led them change allegiance). 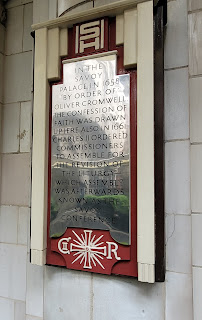 Next up is something that isn't there... All Hallows the Great Church. Which sounds surprisingly like a location used in the Harry Potter franchise. This was one of the main meeting places for the Fifth Monarchists. Located on the corner of Upper Thames Street and Allhallows Lane the original thirteenth century church was destroyed in the Great Fire. rebuilt by Wren only to be demolished by the Victorians to widen Upper Thames Street. A stone plaque used to mark the spot (on Allhallows Lane), but this appears to have been covered up by a large logo board for the gym whose wall it is on.

Located at the pedestrian entrance to Hampton Court is a plaque on the site of the Toy Inn. Reputedly built for 'Oliver Cromwell's Troops' and where Pope wrote the Rape of The Lock. 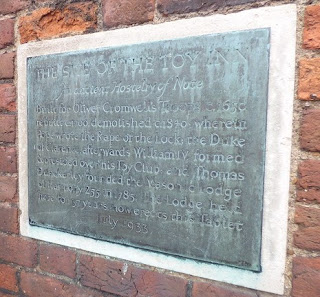