Marquis of Montrose’s Troop of Horse

After the excitement of Captain Frances Dalyell's Troop, recruiting the Army Of Montrose comes down to earth with a bump. Sorry.

A very short-lived troop of horse that we don't really know much about. 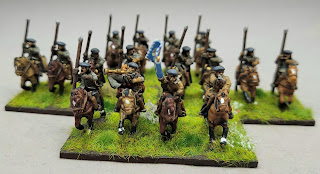 Raised by the Victorian's very own action hero, The Marquis of Montrose, to serve on Clavering’s brief campaign on the Scottish Border in early 1644. Reputedly boasting Scots gentry amongst their numbers. 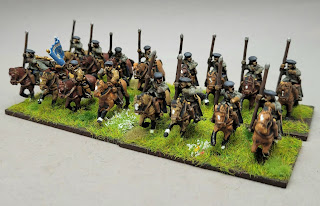 Their very brief fighting history being the taking of Dumfries; the siege of Morpeth; and a skirmish at Sunderland.

And that, gentle reader, is pretty much all that is known about them; other than Blount described their cornet in The Art of Making Devises. 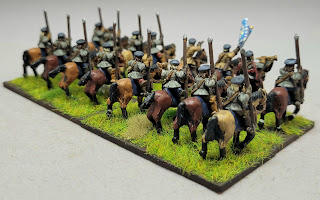 I've chosen to present them as lancers, as I originally intended just to have the Gordon Horse as Montrose's harquebusiers.

Mostly straight from the bag PP lancers. As I was being a cheapskate I rummaged in my spares box to find a trumpeter and a pair of mounted dragoon command figures - all three have had headswaps and blew bonnets fitted. Not particularly impressed with the officer - I've used the same figure with a bonnet headswap before for Fraser's dragoons. That time I gave him a grey coat, worked well; this time I just don't think it suits the buff coat.

If you enjoyed reading this, or any of the other posts, please consider supporting the blog.
Thanks.
Army of Montrose figures Maverick Models Peter Pig Regiment of Horse