Colonel William would be described in Britane's Distemper as "a waliant gentleman, who shew himself a loyal subject of his King, and a faithful and constaint follouer of the house of Huntly in all their expeditions".

I've chosen to go the full on highlander presentation; although records show that they appear to have been quite well equipped and were possibly conventionally equipped with pike and musket. 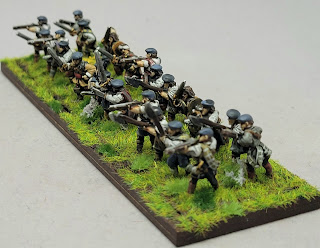 They were a staple of Montrose's Army, being one of the highland regiments to regularly figure in orders of battle. They would fight at Fyvie, Auldearn, Alford, Kilsyth, and the taking of Aberdeen.

Colonel William would be captured by Middleton's Covenanting troops when Huntly's rising collapsed in 1647: he was sent to Edinburgh where he was imprisoned in the Tolbooth. He was referred to as "an active and bloody Instrument in rebellion". He would be eventually be released in 1649. He would die in 1674. 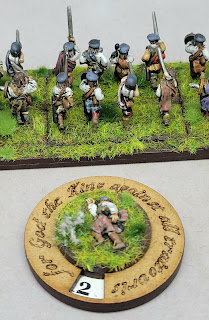 The final unit of Highlanders! All PP figures with just a couple of headswaps. They have a 'normal' officer with a blew bonnet headswap, and one of the highland swordsmen has been given a poorly head.
If you enjoyed reading this, or any of the other posts, please consider supporting the blog.
Thanks.
Army of Montrose figures headswaps Highlanders Peter Pig