- 17 January
Reading contemporary accounts there are reports of many atrocities committed during the Civil Wars; some of these happened, many were exaggerated and some works of fiction.

The rise of the printing press meant reporting such acts was useful propaganda: proving that the enemy is evil, God is on our side, and ultimately swaying people to rally to the cause. Prince Rupert, for example, was famously portrayed as a witch, and Boye his familiar.

One such atrocity that did take place, took place in Chapel-en-Frith, in Derbyshire. Fifteeen hundred Scots prisoners, taken at Preston, were being escorted to awaiting ships to take them to exile in the new world. They had come from Stopford (now better known as Stockport) under the conduct of Marshall Edward Matthews. 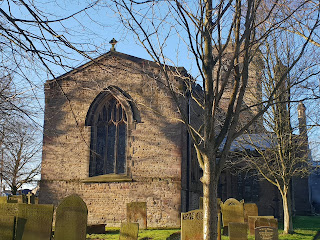 They were rested in St Thomas Becket church in Chapel. Which sounds quite compassionate, only it wasn't. The current church would be considerably overcrowded with that number, the original church most likely slightly smaller. The Scots were locked in there for 16 days, when the doors were opened 44 of their number were dead, and a further 10 died in the following days as they marched through Cheshire.

What's there today? At Thomas Becket was originally a 13th Century church, the graveyard dates from that time (the dead Scots were buried here), there is a pre-Doomsday cross, and an ancient sundial. The atrocity is marked by a sumptuous laminated sign pinned to an inner door. 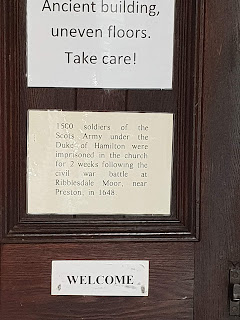 Free parking is available in the marketplace, and as you walk the hundred or so metres to the church you'll pass the old Bulls Head pub which still has a mounting block outside (to allow tired and emotional farmers back onto their horses after enjoying the market - good job they didn't have breathalysers in those days). 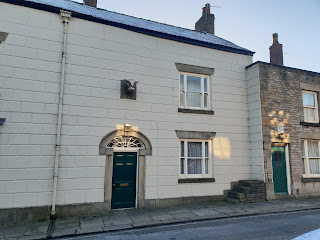 Postcodes for SatNavs
Chapel Marketplace SK23 0EN
If you enjoyed reading this, or any of the other posts, please consider supporting the blog.
Thanks.