- 02 January
The dreadful Witchfinder movie sent my train of thought to the myths, plague, and superstitions of the seventeenth century. Which ultimately led to the Witchfinder General rules. 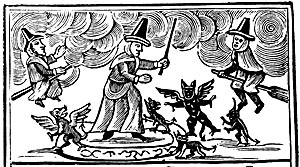 A fierce group of  C17th Welsh women, in national dress, seeing off some strange  cat/bird hybrids.
Once the seed had been sown, I needed to do some research so the Underworld box set had to be watched. PVC catsuits must get hideously sweaty in battle, plus it's probably not a look everyone could carry off.

I've already got a motley crew of civilians, some rather splendid plague physicians, priests, and a witchfinder figure from Matchlock, so I didn't think that it would be too much of a leap to find werewolves, vampires, barguests and noctelingers. Or so I thought.

Figures are easy to find in the '15mm' interpretation that is closer to 20mm, less so in the '15mm is 15 actual millimetres' figure sizing. I eventually found some. 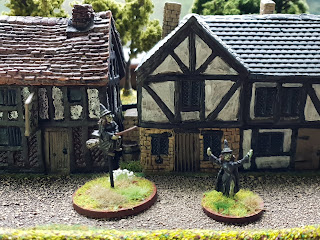 One witch from the coven/cauldron pack, another from the flying pack. Skin painted flesh then ink green wash applied. As Granny Weatherwax would say "punters expect witches to have pointy hats" 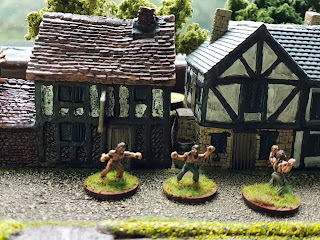 ghouls (as a proxy for noctelingers), 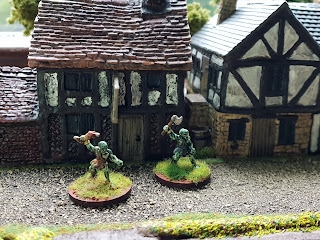 and Khurasan (again via Magister Militum) vampires. Which are a bit too Buffy less 17th Century. Only one figure from the pack is really suitable, so I'm still on the look out for some more. 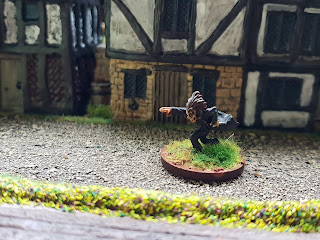 Plus a wolf pack, as barguest proxies. 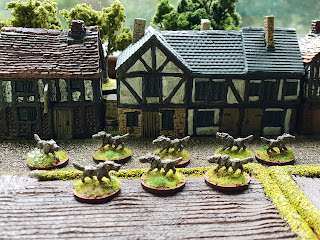