- 13 January
Trained Bands were a militia of part time soldiers; they were formally founded in 1571 under Elizabeth I, although their history dates back much further. Each County had a trained band, but in London there were a number of regiments. Initially there were north, south, east and west regiments; by 1638 four had become six regiments (now called red, white, blue, green, yellow and orange regiments), by the time of the First Civil War there were these six regiments and three suburban regiments (Southwark, Tower Hamlets and Westminster). Each regiment drew it's men from a particular district of the city. In 1643 they were expanded again by the formation of the auxiliaries, giving a total of eighteen regiments. 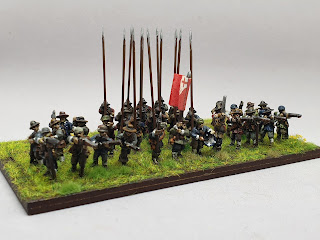 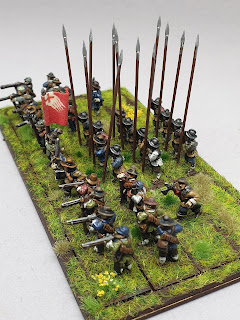 There is much confusion about what coat colours the LTB wore: Brigadier Peter Young wrote that the regiments wore the colour of coat matching their flag/name. This probably stems from contemporaneous confusion surrounding Sergeant Major General Randall Mainwairing. Mainwairing had a connection to the red auxiliaries, but also raised another Regiment of Foot from London (not part of the LTB) who wore red coats lined with white. Witnesses mention red coats and LTB regiments marching out together.

There are extensive records of equipment issued/loaned to the LTB none of which make reference to coats or buff coats; which, considering the minutiae in the records, would be a glaring omission. So we can only assume soldiers of the regiments provided their own clothing.

Pikeman often wore 'trained bande buffe'*, a sleeveless buff coat. Membership of a Trained Band was often associated with being a member of a guild, and guild members were expected to have the wherewithal to equip themselves.

The LTB regiments have a reputation for packing up and going home during long campaigns. As business men they had to return to their businesses and trades to keep the money coming in. It was this state of affairs that led to the formation of the LTB auxiliary regiments - who were full time professional soldiers. 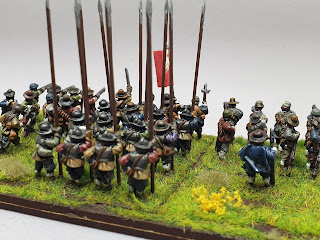 The Red Regiment were believed to be at Turnham Green; fought at First and Second Newbury and went to the Relief of Gloucester.

My Red Regiment has pikeman wearing Trained Bande Buffe, musketeers wear a collection of civilian clothes and the officers of the regiment are somewhat ostentatious in their garb (as befits officers of the senior regiment of the LTB).


* The Royalist news sheet Mercurous Aulicus describes these sleeveless buff coats as trained bande buff, as they were amongst the spoils taken by the Royalists after the Second Battle of Newbury
If you enjoyed reading this, or any of the other posts, please consider supporting the blog.
Thanks.