- 03 June
Sir Henry Bard inherited the Regiment from Colonel Thomas Pinchbeck, who had managed to get himself killed at First Newbury. 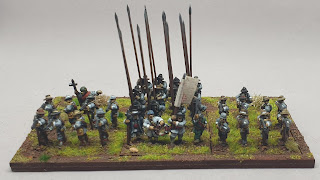 Bard's (finally I hear both my regular readers shout) first outing as Colonel was almost as devastating as Pinchbeck's outing to Newbury: Sir Henry lost an arm at Cheriton, and was captured. Not a very lucky position to hold, Colonel of this Regiment.

They went on to fight at Cropredy Bridge, Lostwithiel, Second Newbury, before garrisoning Campden House, where they pretty much stayed until they had a part in storming Leicester and the battle of Naseby. 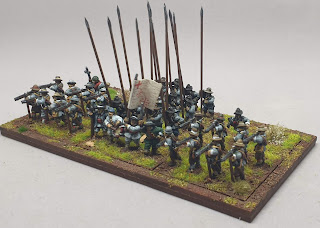 After Naseby, Bard was appointed governor of Worcester, and made an Irish peer as Viscount Bellomont. On a journey to Ireland in December 1646, his vessel was captured by a Parliamentarian warship and Bard was brought back a prisoner to England. He was released in 1647 on condition that he left England, he made his way to Bruges to join the Royal Court in exile.

In 1653 Charles II sent Bard to the Shah of Persia, to obtain financial help to recover the throne of England. Bard travelled in disguise through Turkey and Armenia to arrive in Persia in September 1654. Although he was well-received by Shah Abbas II, Bard's negotiations were unsuccessful. On his own initiative, he travelled to India to seek aid from the Mughal Emperor Shah Jahan. He arrived at Surat in January 1656 but died the following June at Hodal, apparently of heat exhaustion.
If you enjoyed reading this, or any of the other posts, please consider supporting the blog.
Thanks.
figures Peter Pig Regiment of Foot Royalist