Regular readers (hello both of you) will recognise the name Sir Gervase Lucas, we've already 'met' his Regiment of Horse. 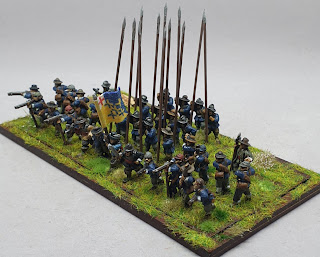 Being based at the Castle, they didn't get out much: they fought in and around the castle; venturing out to fight at Cotes Bridge; Newark; were besieged at Belvoir Castle; they left Belvoir Castle to reinforce Lichfield and were certainly present when Lichfield fell, although it isn't certain if they were besieged in the Close. 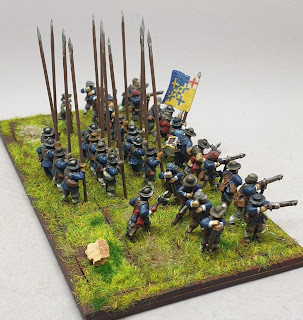 Sir Gervase had helped escort King Charles from the battlefield at Naseby to safety, and after the Civil Wars would be rewarded by Charles II by being made Governor of Bombay, with a salary of £2 a day (and an initial sweetener of £1500). Sadly he didn't get to enjoy this job for long, as he died within a year of taking it up. 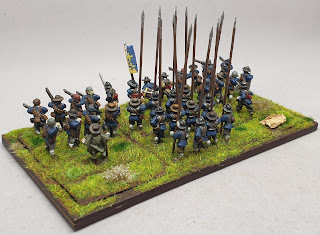 No known coat colours are recorded, so pure conjecture gave them blue coats. A handful of headswaps, mostly to appease my dislike of motions on figures other than pikemen.

If you enjoyed reading this, or any of the other posts, please consider supporting the blog.
Thanks.
figures Maverick Models Peter Pig Regiment of Foot Royalist