- 27 April
The last of the "that's a cracking discount, must buy a big expansion for 2020" figures - which turned out to be 13 Regiments of Horse, 4 Regiments of Foot, some mule trains, and a few bits and bobs. I will of course continue to document my older units, which appeared only briefly on the blog.

A Parliamentarian newspaper report describes four white coated regiments at Aldbourne Chase muster on April 10th 1644: there were a number of regiments present at the muster, and we know their coat colours (which weren't white) apart from four - Dyve's, Cooke's, Duke of York's and Bernard Astley's. So it is quite possible that Dyve's wore whitecoats.   A number of websites list their coat colours as being grey, but provide no evidence. We also know the colour of their colours - a yellow field with red balls. 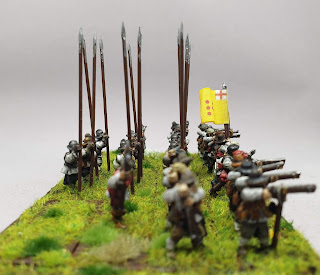 Sir Lewis was captured at the siege of Sherborne and was sent to the Tower of London; he was sent for trial at the  Court of the King's Bench but managed to escape whilst being transferred. He took up arms again and was captured at Preston, this time earning himself imprisonment at Whitehall. He managed to escape from there too, which he recorded in his diaries as the planned day of his execution: he leapt from a second floor toilet chute into the Thames at high water, swimming to a waiting boat. He then fled to Ireland to join the Royalist cause. 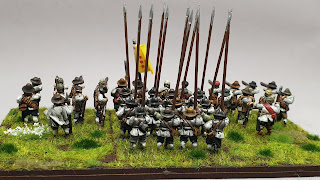 He died two years later having gambled much of his fortune away. He is buried at Combe Hay in Somerset.