- 03 August
A Royalist Regiment of Dragoons that fought during the First Civil War.

Raised in December 1642 it was expected that the Regiment would easily recruit 1000 men; in reality, at their first muster, they numbered just 60.

They mainly fought in and around Cheshire, Shropshire and into the Welsh Borders. 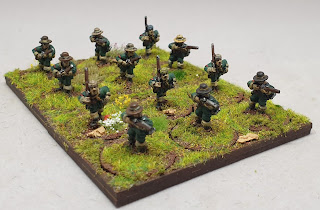 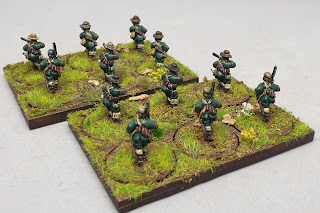 They took part in skirmishes at Nantwich and Tarporley; the first battle of Middlewich; possibly Hopton Heath; more skirmishing at Moss House, Market Drayton, and Loppington; stormed Whitchurch; battle of Wem and Leigh Bridge; probably at the siege and battle of Nantwich; believed to have stormed Market Drayton and Hopton Castle; definitely at the storming of Oswestry; possibly stormed Sir Vincent's home, Moreton Corbet, and a skirmish at Montgomery; the Battle of Montgomery Castle; relieved Beeston Castle; the siege of High Ercall; the battle of Denbigh Green; possibly at the battle of Stow on the Wold before being besieged first at Bridgnorth then in Worcester. 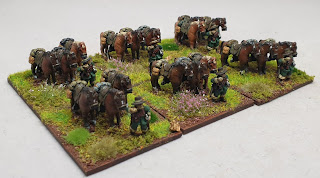 We know the names of a number of soldiers in the Regiment but apart from that we don't know what colour coats they wore, or even if they were issued any; nor what colour and design of guidon they carried. I've gone for green coats, in honour of some Heroics and Ros dragoons that I painted a very very long time ago in French Napoleonic gun carriage green. They carry a pale yellow guidon just like the Sealed Knot re-enactors Sir Vincent Corbet's Coy.


Sir Vincent Corbet (modern writers oft have it as Corbett) was the MP for Shropshire during the Short Parliament. His home, Moreton Corbet Castle saw repeated bouts of fighting, and took considerable damage. It was repaired after the wars, but fell into disrepair in the 18th century and was abandoned.

He died in London, at the age of 39 in 1656, his body was returned to Shropshire and he was buried at St Bartholomew's Church, Moreton Corbet, Shropshire, SY4 4DW (handily positioned next door to the ruins of Moreton Corbet Castle).
figures Maverick Models Peter Pig Regiment of Dragoons Royalist