The Queen's Lifeguard of Horse 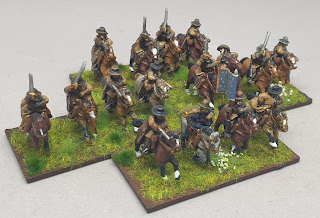 Led in the field by Henry Jermyn, 1st Earl of St Albans, Henrietta Maria’s Master of Horse. Jermyn had accompanied the Queen to The Hague prior to the outbreak of war to raise support for the King. Jermyn was the Queen’s favourite, gossip suggesting that he was the true father of Charles II. Domestic State Papers for 13 August 1660 contain a report by Capt. Francis Robinson of Nathaniel Angelo, a Windsor clergyman, asserting that 'all the royal children were Jermyn's bastards'. After Charles I’s execution rumours spread that Henrietta Maria and Jermyn were married.

Jermyn was responsible for the design and development of London’s West End, there is a plaque on Chatham House commemorating his life and achievements see the ECW Travelogue for further details.

They carry a cornet captured by Parliamentarian troops - it is by no means definitive that it belonged to the Queen's Lifeguard, but stylistically a blue field of fleur de lys with a crown is very suggestive of belonging to the Queen's Regiment of Horse. A similar cornet was taken at Naseby - instead of the crown an intertwined 'H' and 'M' were next to an 'R'.
These will be my last Royalist horse for a while: I won't miss painting the bloody awful one piece castings of the pistol pack.
If you enjoyed reading this, or any of the other posts, please consider supporting the blog.
Thanks.