- 06 August
The story of the Civil Wars is a story of two men, Cromwell and King Charles, butting heads over how the three kingdoms should be governed. A rather simplistic and stylised (not to mention inaccurate) view, but a view that seems to dominate our history books, and national consciousness. 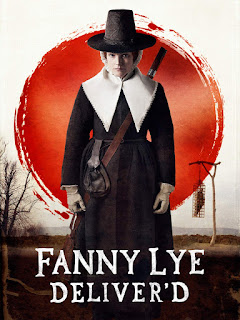 But what of the lives of the others who gave and suffered so much during the turmoil? Civil War petitions give us an insight, as do household records such as Lady Fanshawe's Receipt Book. The 'lot' of women rarely taking centre stage in our view into seventeenth century Britain, but that changes with the latest film that is set in 'our' period, albeit a slightly strange cinematic offering.

Fanny Lye Deliver'd has much in common with earlier films set during the period: it was beset with financial issues and nearly didn't get released (as did To Kill a King), ventures into magic mushroom use (A Field in England), and features a strange group of radical thinkers (Winstanley - although in this case the Ranters rather than the Diggers), and is tinged with witchcraft/spirituality with a dose of horror movie vibes (Witchfinder General), all whilst having a miniscule cast (A Field in England, Hex).

Starring Maxine Peake as the titular protagonist, Charles Dance plays her puritanical husband Captain Lye. This isn't a bish-bash-bosh war movie; it is very much in the vein of a Field in England/Winstanley/Hex  - this is a film that will make you think.

Captain and Fanny Lye live with their son on a farm, their peace is shattered when a naked couple stumble into their house whilst the Lye family are out at church.... 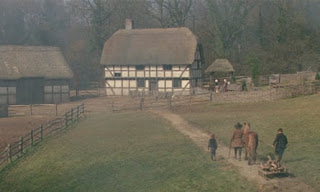 Fanny Lye is a feminist film: which questions the role of the subjugated protagonist in a patriarchal society; her strength of character and resolve ensuring that she will survive somehow.

The film also employs a rather simplistic interpretation of the Ranters - whilst it does hint at pantheism (God is everywhere, and in all things), it does want to concentrate on the licentious behaviour that the Ranters were accused of demonstrating.

The cinematography has a very 1970s feel to it, apparently the director wanted a 'classic cowboy film' look to the film.

Visually it is spot on, sets and costumes look historically accurate.

But the plot is in parts a little too predictable,  and the sex scene could probably win the Oscar for worst scene in a film - tighter editing and less graphic detail would have suited the film better. The film's postscript ending perhaps borrows a little too much from Mad Max.

Available on streaming services now, and on DVD soon.